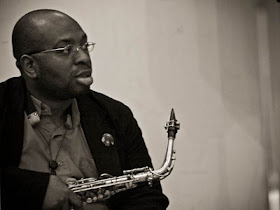 Last night, I caught an extraordinary set by the Darius Jones Quartet at Vision Festival 17, which runs through Sunday at Roulette. (I very much enjoyed what I saw of the Farmers by Nature trio—with Craig Taborn, William Parker and Gerald Cleaver—and Parker's own In Order to Survive quintet, but the Jones band hit me the hardest.) The performance centered on a series of heart-rending ballads. Jones sounded as precise and openhearted as I've ever heard him. Every time I go see him, I'm struck by the care and gravity he puts into each phrase; even if the passage is a delicate one, he gears up, bears down, applies enormous psychic pressure. The notes have a vocal cry—smooth, yet with rasp always threatening to creep in around the edges, like peppered honey—but they're sculpted and purposeful.

The same goes for Jones's suitelike compositions. By "free jazz" standards, they're compact and accessible; they have movement and narrative drive. (The episodic, busy-to-sparse "You Have Me Seeing Red" and the tender "The Enjoli Moon" are two that stuck in my head.) When they work up to a screaming peak, that peak is earned, contextualized. The rest of the band—pianist Matt Mitchell, bassist Trevor Dunn and drummer Ches Smith—sounded really alert and attuned, but each time Jones entered, I felt a different kind of grip on my brain and heart. He's entered a new phase of maturity with this project. Its emotional spectrum is total. (Hear for yourself on Book of Mæ'bul (Another Kind of Sunrise), out now on Aum Fidelity, which celebrated its 15th anniversary at last night's Vision gig.)

As I listened I thought about my history with the Vision Festival, and how I might not have appreciate a set this nuanced and straightforwardly beautiful had I seen it back in 2000, when I first attended the event. (I volunteered at the fest that year, via my DJ-ing gig at WKCR, and I remember a fun afternoon spent folding programs in the company of heavy players like Alan Silva and Mat Maneri.) At that time, I had a real stake in the idea of avant-garde-ness in music. I was looking for a kind of assault, the freer, longer, more difficult and abstract—and often, louder—the better. I remember countless variations on this idea from various Vision Fests: a set by Peter Kowald's trio with drummer Gunter Sommer and a monster of a David S. Ware solo performance at a space above St. Marks Place; the 2 Days in April band with Fred Anderson, Kidd Jordan, William Parker and Hamid Drake at a cavernous venue in Soho (and a variant of that band minus Anderson, plus Henry Grimes many years later); mammoth Bill Dixon and Sam Rivers ensembles at Angel Orensanz; Peter Brötzmann in various settings at Abrons Arts Center last year.

Though my tastes—i.e., exactly what it is I'm looking for when I attend a jazz performance—might have changed somewhat, I treasure all those memories, not to mention the longevity/consistency of the Vision Festival, which has been something like a personal North Star in my NYC concertgoing life. I may have been guilty of taking the fest for granted the past few years. (Talking between sets last night, a friend and I were struck anew by the fact that many people travel from out of town for the event, which has come to seem to us like an everyday neighborhood hang.) Last night, I did my best to appreciate the awesome bounty of this event—for one thing, Roulette might be the ideal Vision venue; the sight lines and sound were about as good as I've ever found them to be at any previous edition—especially the fact that after so many years, it still had new joys to offer. Sure, there was an element of old-guard free-jazz stampede to be found in the In Order to Survive set, but the Jones performance (and in a very different way, the Farmers by Nature set) gave me hope that younger practitioners of what is often called "this music" are looking for ways to shatter the wall of impenetrability that surrounds the subgenre, to retain the gut-busting passion while at the same time putting on a warm, relatable show, one that avoids improvisational bombast, that places a premium on sensitivity and experiment (not just a pat idea of what's "experimental"). On the latter tip, I think of the drowsy impressionist blues that ended the Farmers set—a major surprise to me and, I think, the musicians themselves, and a definite highlight of the evening.

There's little more to say other than this: Check out the Vision Festival over the next few days if you can. (Joe McPhee and Sonny Simmons play tonight, Wednesday.) Go back next year and the year after, even if you think you've got this territory fully mapped. Like any great cultural institution, Vision can grow with you, and you with it.
Hank at 9:38 AM