The ecstasy of the present: Gorguts and Carcass return 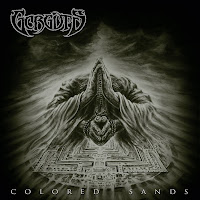 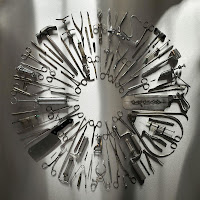 For sheer big-event-ness, no metal comeback record this year can compete with 13. But for those of us obsessed with death metal and related styles, Colored Sands and Surgical Steel—the respective new ones by Gorguts and Carcass—are each pretty damn momentous as well. My Pitchfork reviews of these titles are linked above.

As I did in my reflection on the experience of reviewing 13, I'll take off my ill-fitting critic's hat here. From a fan perspective—really the most important one, in the end, especially when the subjects are two legacy acts in an especially fan-driven subgenre such as death metal—I'm ecstatic about these records. The respective trajectories (not to mention aesthetic priorities) of Gorguts and Carcass vary, but one thing these two bands have in common is that, as of roughly the mid-aughts, we had no reason to believe that we'd ever hear from either again. And yet even stacked up against each band's classic back catalog, these records are outstanding—they're statements not just of sustained proficiency but of sustained excellence.

Each in its own way, Colored Sands and Surgical Steel—and, now that I think about it, 13 too—is about coming to terms with the weight of history, then shrugging it off and embracing the ecstasy of the present moment. These LPs are meaty statements: dense, info-packed, loud, wild, weird, fucking fun records, and also ceremonies of communion between first-generation extreme-metal practitioners (Luc Lemay of Gorguts, Bill Steer and Jeff Walker of Carcass) and younger virtuosos (Colin Marston, Kevin Hufnagel and John Longstreth on Colored Sands; Daniel Wilding on Surgical Steel). In short, any quibbles I've aired aside, they're exactly what they should be. These are the kinds of albums that reaffirm fandom as a lifelong pact: "As long as you keep making music, I'll keep caring." I love them.
Hank at 7:50 AM