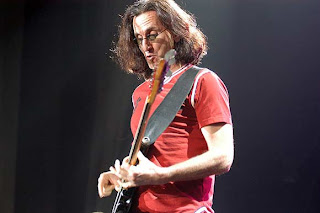 there's something nerdy about attending any sort of entertainment event by one's self, no? there's also something nerdy--or at least i'm told--about being a fan of the band Rush, no? so therefore it must be considered an exceedingly nerdy act to have attended a Rush concert alone, which i did tonight.

however history might judge me, i had an awesome time. (tenth row seats at Madison Square Garden certainly didn't hurt.) my enjoyment was, as you might imagine, proportionately greater than it was the time i went to see a screening of a Rush live DVD at the Union Square movie theater. yes, i was also alone then. (and yes, it's somewhat liberating to admit in such a public way to such socially freakish behaviors.)

anyway, it's been a decade and change since i last saw Rush. that show--the only one i'd attended before tonight--was on the "Counterparts" tour which had to have been sometime in '94 or '95, which would have put me smack dab in the middle of high school. i remember little about that concert, other than that it was awesome and that the band closed with the blistering instrumental "YYZ," as they also did tonight.

nostalgia was a big factor in my enjoyment tonight, of course. several times during the show, it occurred to me as i sang along and air-drummed with dogged precision for how many years i had been singing along and air-drumming to these songs. a few selections in particular literally brought me to the verge of tears, namely "Mission," a meditation on the creative process from the "Hold Your Fire" album, and "Subdivisions," a meditation on the inherent pathos of a suburban upbringing from the "Signals" album. both songs are in some sense (i.e., the socially acceptable one) quite cheesy. in another sense, they are utterly true and poignant. i guess it's easier to tap into that latter sense when one is by one's self.

i remembered falling asleep to those songs in high school; i remembered listening to "Subdivisions" driving through actual subdivisions late at night thinking about how the line "up lighted streets on quiet nights" had to have been written about kids growing up in Leawood, KS, as i did; i remembered the countless times i'd listened to "Mission" on headphones and felt that tug, that inescapable poignance that i never really felt anyone else would get.

and then there's this awesome, overwhelming sense in which this show--and really no Rush show, save the 30th anniversary victory lap of a few years back--ain't a nostalgia trip at all. the band has a new album, "Snakes and Arrows," their 18th (!) full-length, and they played a whole bunch of songs from it tonight. it's certainly not all great, but goddamn it, it's very, very sincere. this band does not slack. even as their music has gotten less ambitious, less baroque, less--say it with me--progressive, it has never felt untruthful or dispassionate. when i first heard the new disc, i was pretty bummed. listening to it over and over again recently, i can definitely see myself welcoming these songs into future live sets, as i welcomed "One Little Victory" from the second most recent disc, "Vapor Trails," tonight.

i've said this so many times but i can't say it enough: Rush is the only classic-rock band that isn't a living fossil. they've never reunited, because they've never broken up. they've never stopped making albums. they play all their hits in concert, but they also play a ton of recent material, and you know what? the fans love that mix.

no b.s. with these guys. you should've seen the sincerity with which Geddy thanked the crowd--i lost count of the times he said, "we really appreciate it!"--or with which he took some video of the audience "for his friends back home in Canada." onstage, he and guitarist Alex Lifeson are goofy, joyous, entirely lovable, while Neil Peart is an utter workhorse. when he finally smiled at the end of the set, it was incredibly heartwarming. what a genius, genius musician...

there is something so happy, so joyful in this experience of loving a band over time and seeing them play. you just want to hug someone each time they start up a new tune that you've loved for years. i almost did just that during the intro to "Natural Science"--after texting a few of my buddies that they were playing this unbelievable piece, i just started beaming and i turned to the middle-aged guy next to me and i was like, "man, i can't believe they're playing this song!" he was less demonstrative then me, but his contented smile told me that he too was a lifer.
Hank at 1:47 AM